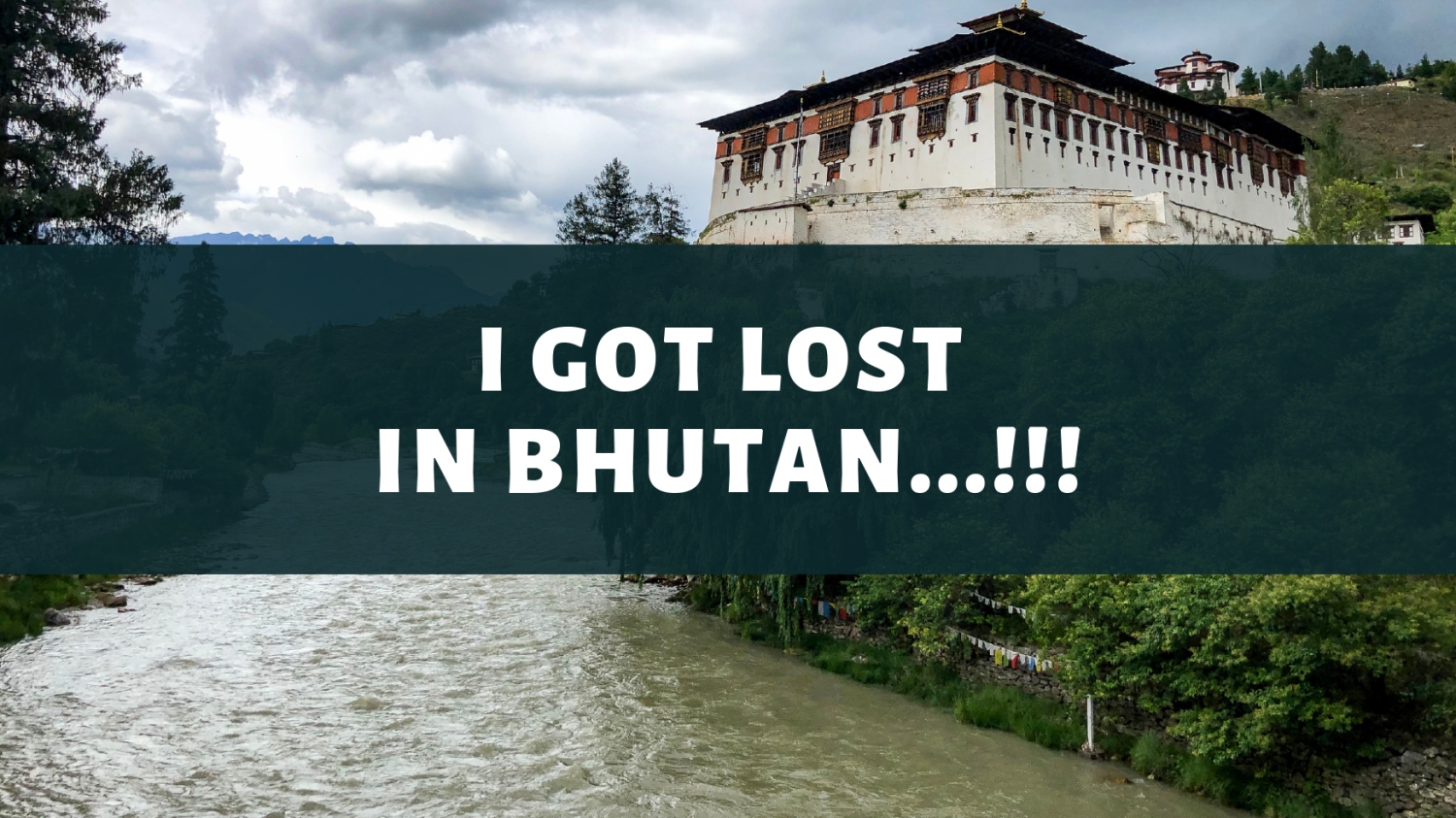 It was in the middle of some random talks when my uncle (Sanjeeb Baruah), his son (Barun Baruah) and myself planned a Bhutan trip on our bikes. As I am from Guwahati, Assam, the distance to Paro would be like 500kms. We would be riding my Royal Enfield with my bag on the pillion as no one in my life to accompany me 😦 and my uncle took his Triumph Bonneville.

With some proper planning we set out on this journey on 4th July at around 5 AM. I stayed at my uncle’s place the previous night for easy planning and packing. We set our alarms at 3:30 in the morning for last minute packing and getting ready.

At sharp 5 AM, we set out for Phuentsholing – the place where all the permits are done for Immigration. We reached the place at 12:30 Bhutan Time (30 mins ahead of India).

After the permits for us and the bikes are done, we set out for Paro because it was like 3 PM and thought we are fresh enough for the next 3-4 hours ride ahead. We preponed our stay in the hotel at Paro (Hotel Phunsum) and headed towards the place.

After riding like 15-20 mins, the weather took a turn and it was almost about to rain. We stopped and put on all the gears. My uncle asked me to follow and started his motorbike and me with all the gears and GoPro took like 1-2 mins extra to start. After some time, there was a ‘The Road Not Taken’ situation – one on the left with a steep curve up and the one straight ahead has a gentle elevation.

Me being the smart one thought that as we were going up, the road that my uncle might have taken was the left one although it was a sharp turn and steep. I turned left and proceeded.

After some time, I crossed a few locals, I stopped and asked if that was the right way to Paro and they said Yes and so I was least bothered. I rode ahead.

After riding like an hour, I knew something was wrong. But I wasn’t worried but then something popped into my head – which was interesting and I laughed.

In Bhutan, there are check posts everywhere, especially when entering a major city or leaving one. When you enter or exit, you need to show your permits that you are allowed there – it is applicable to both locals and foreigners.

As Barun (uncle’s son) was on the pillion, we gave the responsibility to him to get down in every check post that we find and get our passports signed. Now as it happened, my passport and my road permit were with him in his bag. So not only am I lost in a foreign country, I did not have my documents with me. None! I just had chocolates with me and some clothes and 3 cameras. I might as well be a thief :p

Laughing at myself and the situation I continued riding. I crossed a few landslide locations where it was way too slippery to cross but thankfully my tires didnt betray me and I didn’t fall in any although I was sure I will. After a few kilometres, one interesting thing started. Fog. Not just normal grazing over your skin fog, super intense fog where you see nothing ahead. My speed dropped from 70 kmph to like 10 kmph because it was hard to see anything. It was near zero visibility on those mountains. I was thrilled and scared at the same time. I had to remove the motorbike glasses and the visor for better visibility even though it was super cold and my skin was getting numb.

My uncle did get a local sim which I didn’t. Smart me, you see. I had my Jio which successfully left my side right after Phuentsholing but in the middle of the mountains, I suddenly got a missed call from the local number of my uncle.

Jio is back? I love you so much Jio.

I guessed it was his local number as no one in Bhutan knows my number. I tried calling back but the network was gone again.

The fog slowly began to decrease and I found a little shop that looked like a canteen. The hungry beast I am, I stopped and enquired if they had coffee. There were two girls who were attending and they readily said yes. I had to take it. I was cold. They offered me an amazing cup of coffee. While having it, I requested if I could use their phone to call my uncle as I knew something was wrong and I had to inform them that everything is okay from my end. I called but their network was not there. Oh yes, before this, I met a few police officers on the way. I asked if I could make a call but they said that there is no network on that patch of road and only if I move ahead, I will get some network to make a call.

But as I couldn’t get my uncle on a call, I asked if I could send a text and I sent them a message saying that we will meet in Paro directly at the hotel.

Saying my thanks, I moved ahead only to find worse fog ahead after a few kilometres. There were times where I had to stop my motorbike on the middle of the road and push because I felt it was dangerous to ride in those sharp turns with near zero visibility.

I always get happy when a car comes and passes me. I would use the rear lights of that car to find my way but again the car would speed up and I am back to being alone. I was riding slow because it was getting pitch black on those mountains and I had to reach Paro safely.

Luckily after like 20 kms or so, the fog lessened and I reached a huge valley. I had to stop there. The beauty was more than I could explain. I had to stop. On one side it was flat land, road on the middle and on the right it was a huge mountain. I couldn’t see much but it was really beautiful. I tried to take a picture of the mountains with my phone.

I was riding almost like 3 hours, all alone on a foreign and the worse thing was that I didn’t have any documents with me. So if something bad happened, I had nothing to prove that it was me. Oh yes, also my motorcycle insurance will not cover anything that happens in Bhutan. Good news from all sides. :p

Finally I reached Chukha Checkpost and the police asked me to stop for the documents. I stopped. I went to the officer-in-charge there and told him the whole story. He got confused and said that there is just one way to Paro and this is the way. I felt relieved and confused at the same time but continued the talk with showing my uncle’s number to him and asking if he could make a call. He readily agreed and called my uncle. Luckily he picked up and said that he is in the Dantak Canteen – like 20-30 mins from the check post.

I was relieved and waited for them on a chair outside the checkpost. Almost every police in charge or public transport drivers came up to me to ask what happened because I was fully suited and sitting outside.

After some time my uncle arrived and we all laughed at what happened. After the documents and permits are done, we knew that I took a short cut on the diversion (and skipped the obvious road straight ahead). After some time, when my uncle didnt see me, he thought I might have had a puncture and so returned to the point from where we started together and then took the other way – the one that I took.

We made friends with the officer in charge (Samyang was his name most probably). He even gave us his personal number and asked us to call him if there is anything that we needed help with. Such a happy fellow he is.

So as the documents were done, we moved ahead to our destination and reached Hotel in between 11 – 11:30 PM.

Bhutan was a great experience and I can’t wait to get back there once again, to ride on those mountains again, to feel the air, to meet the people, to make more friends. I miss Bhutan already.

I want to end this with one note, always keep your documents with you, no matter what. Thats what will keep you safe in a foreign land.

Feel free to drop your comments down below or contact me for any further information about Bhutan.

Follow my blog because more stories and tips & tricks are coming soon. So stay connected!

You can support me being a Patron:
Become a Patron!
This will help me take up blogging and travelling as full-time and bring to you more amazing experiences and also loads of tips for travelling, me being the guinea pig.
Special gifts awaiting if you pledge.

Thanks for reading,
Your Friendly Neighbourhood Traveller